So this is it. As what we’ve heard few days ago, iH8snow was working on Sn0wbreeze 2.0. And finally, it’s now available for download. 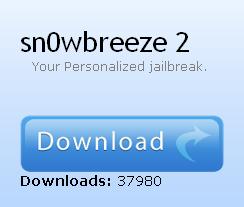 This new version works the same way as the Pwnage Tool by the Dev Team. Sn0wbreeze is a tool for Windows that jailbreak iPod and iPhone models, setup custom boot logos, activate iPhone, root partition size, creates custom IPSW packages that jailbreak iPhone while at the same time preserving the baseband- thus allowing users to unlock the device but still work with any carrier.

Sn0wbreeze 2.0 will work on the list of supported devices below, but the good thing is it (Sn0wbreeze 2.0.1) can also Jailbreak iOS 4.1.

Sn0wbreeze 2.0 can be downloaded via this link:

Sooner, I’ll post a tutorial on how to jailbreak iOS 4.1 using Sn0wbreeze 2.0.1. So just stay tuned!