Share this on social:
Sophos announced today the availability of its free anti-virus solution for Mac home users. Sophos Anti-Virus Home Edition for Mac, which provides automatic detection against existing and new threats for Mac OS X, is already available for download at no extra cost. 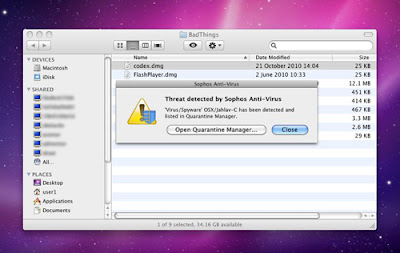 “While most businesses recognise the importance of protecting their Mac computers from malware threats, most home users do not,” said Chris Kraft, product management vice president at Sophos. “By offering free industrial-strength security to home users, we aim to protect Mac users against today’s and tomorrow’s Mac threats. Everyone knows that Macs are beautiful computers – Sophos wants to lend a hand to keep them that way.”

The move by Sophos is due to the continuously increasing number of Mac users worldwide enticing hackers to target not only Windows platforms but Macs as well. The free Sophos Anti-Virus for Mac detects both Mac and Windows malware and is backed by SophosLabs, the computer security company’s global network of highly skilled researchers and analysts who proactively stop new unseen threats.

One user commented that this post is just some sort of non-sense. But I’d bet he’s wrong. Below is a video from Sophos security expert Graham Cluley showing how hackers are setting up websites to infect Apple Mac users with the RSPlug Trojan horse. It means one thing though: Mac is really not short of security flaws. And such flaws can be exploited anytime hackers wanted to do it.