Are you using Twitter? So, you might be using several Twitter applications to manage your tweets or the likes.
Here comes another tool by Amit Agarwal which determines the approximate sleeping schedule of a particular Twitter user.

Sleeping Time is a Twitter app which basically calculates the sleeping pattern of every Twitter user. The algorithm works by analyzing the time a user stays least active on Twitter.

Here’s the screenshot taken after using the application: 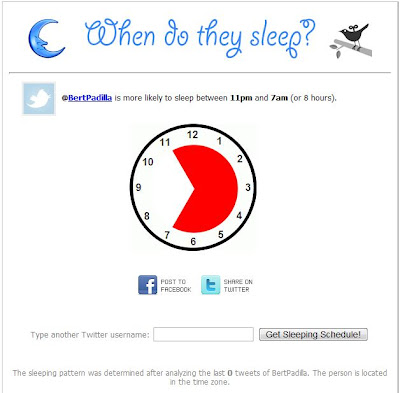 The approximation is relatively accurate! I normally sleep during that time… The only problem with this app is that, it can’t fetch the user’s avatar- yet still a great tool.